Total Brain & Spine Institute is committed to providing the best care and treatment for Herniated Disk (or Bulging Disk) throughout Tampa, Florida. Dr. Le and his team are standing by the assist you.  Contact us today to schedule a consultation.

A herniated disc (also called a bulged, slipped or ruptured) disc is a fragment of the disc nucleus that is pushed out of the annulus, into the spinal canal through a tear or rupture in the annulus. Discs that become herniated usually are in an early stage of degeneration. The spinal canal has limited space, which is inadequate for the spinal nerve and the displaced herniated disc fragment. Due to this displacement, the disc presses on spinal nerves, often producing pain, which may be severe.

The bones (vertebrae) that form the spine in the back are cushioned by small discs. These discs are round and flat, with a tough, outer layer (annulus) that surrounds a jellylike material called the nucleus. Located between each of the vertebra in the spinal column, discs act as shock absorbers for the spinal bones.

A single excessive strain or injury may cause a herniated disc. However, disc material degenerates naturally as one ages, and the ligaments that hold it in place begin to weaken. As this degeneration progresses, a relatively minor strain or twisting movement can cause a disc to rupture.

Certain individuals may be more vulnerable to disc problems and, as a result, may suffer herniated discs in several places along the spine. Research has shown that a predisposition for herniated discs may exist in families, with several members affected. 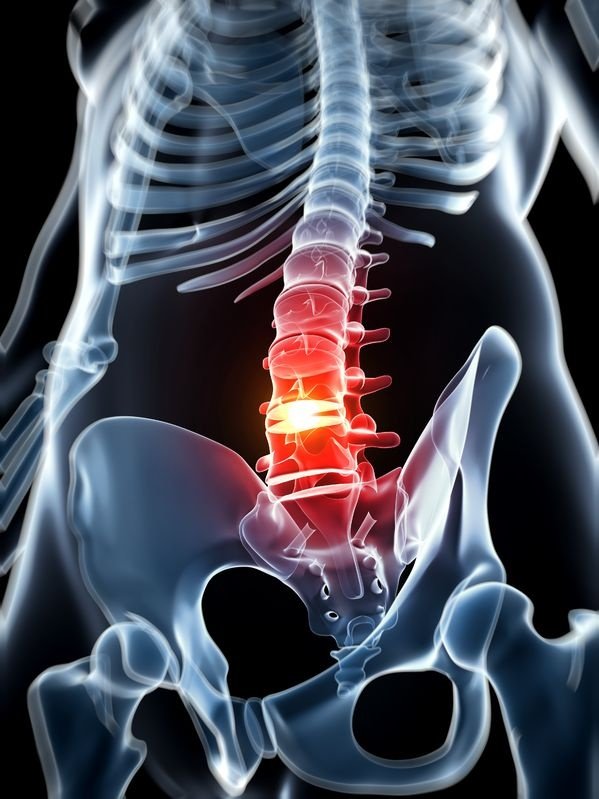 Lumbar spine (lower back): Sciatica frequently results from a herniated disc in the lower back. Pressure on one or several nerves that contribute to the sciatic nerve can cause pain, burning, tingling and numbness that radiates from the buttock into the leg and sometimes into the foot. Usually one side (left or right) is affected. This pain often is described as sharp and electric shock-like. It may be more severe with standing, walking or sitting. Along with leg pain, one may experience low back pain.

Cervical spine (neck): Symptoms may include dull or sharp pain in the neck or between the shoulder blades, pain that radiates down the arm to the hand or fingers or numbness or tingling in the shoulder or arm. The pain may increase with certain positions or movements of the neck.