Total Brain & Spine Institute is committed to providing the best care and treatment for Vertebral Compression Fractures throughout Tampa, Florida. Dr. Le and his team are standing by the assist you.  Contact us today to schedule a consultation.

Vertebral compression fractures (VCFs) occur when the bony block or vertebral body in the spine collapses, which can lead to severe pain, deformity and loss of height. These fractures more commonly occur in the thoracic spine (the middle portion of the spine), especially in the lower part.

The main clinical symptoms of VCFs may include any of the following, alone or in combination: 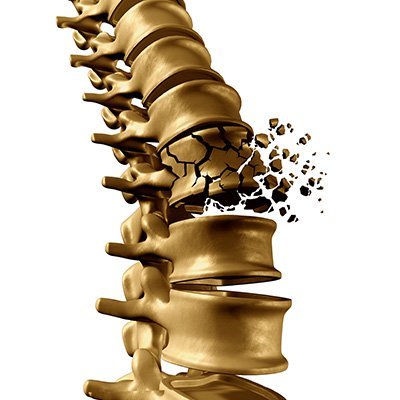 In people with severe osteoporosis (weak, brittle bones), a VCF may be caused by simple daily activities, such as stepping out of the shower, sneezing forcefully or lifting a light object. In people with moderate osteoporosis, it usually takes increased force or trauma, such as falling down or attempting to lift a heavy object to cause a VCF. VCFs are the most common fracture in patients with osteoporosis, affecting about 750,000 people annually. VCFs affect an estimated 25% of all postmenopausal women in the U.S. The occurrence of this condition steadily increases as people age, with an estimated 40% of women age 80 and older affected. Although far more common in women, VCFs are also a major health concern for older men.

People who have had one osteoporotic VCF are at five times the risk of sustaining a second VCF. Occasionally, a VCF can be present with either minor symptoms or no symptoms, but the risk still exists for additional VCFs to occur.

People with healthy spines most commonly suffer a VCF through severe trauma, such as a car accident, sports injury or a hard fall.

Metastatic tumors should be considered as the cause in patients younger than 55 with no history of trauma or only minimal trauma. The bones of the spine are a common place for many types of cancers to spread. The cancer may cause destruction of part of the vertebra, weakening the bone until it collapses.